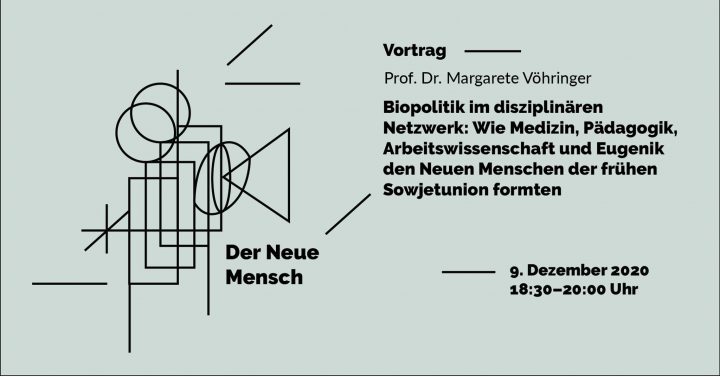 
Lecture “Bio-politics in a disciplinary network”

Bio-politics in a disciplinary network: How medicine, education, ergonomics and eugenics shaped the New Man of the early Soviet Union.

The lecture will be given in German, in the form of a webinar, via the online platform Zoom with simultaneous translation into English. Those interested in attending can register here: https://zoom.us/webinar/register/WN_Bw0Z7PNHQeuvgmzQPpzTjQ

Following accelerated industrialization in the mid-1920s, the Soviet Union focussed on the transformation of peasants into workers. This placed its citizens in the paradoxical situation of the New Man, who had to create the nascent socialist society and who himself was supposed to be a consequence of a new, still non-existent world. Only the human sciences seemed capable of solving this paradox. The Socialist Academy of Sciences set up departments not only for mathematics and physics, but also for psychology, neurology and biology. It was predominantly here that practice-related disciplines were programmatically designed, including Pavlov’s theory of reflexes as a basis for pedagogy, work sciences where physiology and psychology could be applied, and, moreover, eugenics as a field of genetics.

Using various examples, Margarete Vöhringer examines the audacity of this drive for the New Man, while also highlighting its potentially catastrophic bio-political consequences.

Margarete Vöhringer is professor of “Materiality of Knowledge” at the Department of Art History at the Georg-August-Universität Göttingen. She studied art history and media theory, philosophy and aesthetics, as well as media art at the Karlsruhe University of Arts and Design. After completing her doctorate in 2006 at the Humboldt University in Berlin, she taught at universities in Berlin (Freie Universität, Humboldt University, Universität der Künste), as well as in Weimar and Zurich. In 2006–2009, she was a research fellow at the Zentrum für Literatur- und Kulturforschung (ZfL) [Center for Literary and Cultural Research] in Berlin, where she took part in both the DFG [German Research Foundation] project “Reflex und Kognition” and the edition of the “Historische Wörterbuch interdisziplinärer Begriffe” [Historical Dictionary of Interdisciplinary Concepts]. In 2011–2016, she headed the “Visuelles Wissen” [Visual Knowledge] research project and was a member of the planning team at ZfL. Her research interests include experiments in art and science, perception research, the Russian avant-garde, the history of cultural techniques, and the materiality of knowledge.

About the lecture series “Der Neue Mensch” [“The New Man”]

At the beginning of the 20th century, people across Europe and across various political camps affected by industrialization and social change seemed in need of a renaissance. The idea of what the New Man should look like took on specific forms depending on the ideological structure of different movements. What they had in common, however, was to work programmatically in order to enforce the metamorphosis of man either through reformatory or revolutionary means. Striving towards the future, towards this New Man, is what made these diverse political movements genuinely modern. Even restorative and reactionary movements used the image of renewal when desiring to reinstate a supposedly grandiose past.

This series of lectures is devoted to the various political, social, creative and architectural experiments of the 20th century and to an examination of both their visionary and idealistic aspects and their dark sides. The lectures and discussions are intended to consider phenomena such as housing developments, standardization and regulation strategies of everyday life, as well as various bio-political approaches, while simultaneously using these phenomena to pose questions about the distortion of the New Man utopia and its dystopian potential.