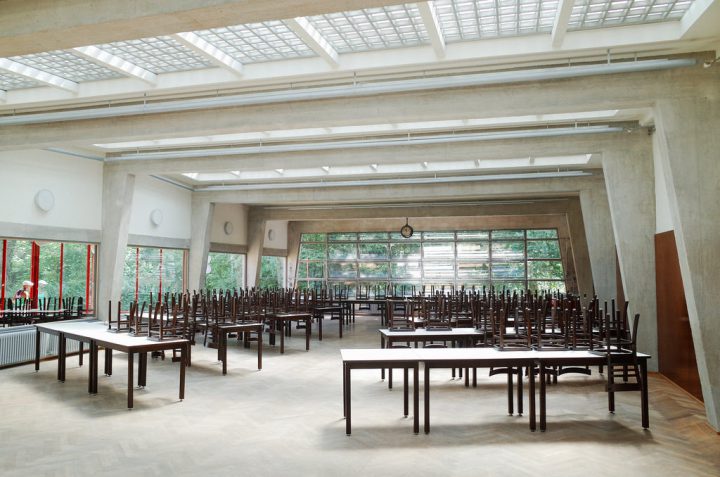 We invite you to all open lectures in Bernau bei Berlin as part of the project Ćwiczenie nowoczesności • Exercising modernity • Modernität üben:

THE LIEBLING PROJECT: THE MODERN THINK TANK OF THE WHITE CITY
23.10 (tuesday) | dining hall at Meyer-Wittwer-Bau
19.00

Modern architecture and its local adaptationwere the basis for the 2003 declaration of the White City of Tel Aviv as a UNESCO World Heritage Site, generating momentum for urban conservation projects. Conservation is usually perceived as a process that focuses on the physical aspects of the modernist movement, rather than its intangible, social aspects. The decision to establish a Center focused on all aspects of architectural heritage, both tangible and intangible, provided an opportunity to host a unique residency program: The Liebling Project. The Liebling Project was a research and action group that invited multidisciplinary creatives – from architects to musicians – to study the concept of conservation and urbanism in the context of modern architecture. The project, in collaboration with the Conservation Departmentof the Tel Aviv-Yafo Municipality, operated at the White City Center during its inaugural year, developing future activities of the urban culture and education center dedicated to the earlyyears of Tel Aviv, and the modernist influencesthat shaped it. The project – supported by the executive team of the White City Center – madetemporary use of the Max Liebling House as it isbeing converted into the WCC. The reopening of the Center is scheduled for autumn 2019

The lecture focuses on two significant concepts that have been shaping Tel Aviv’s distinct character and contemporary values. The language of modernist architecture has remained the most valuable and meaningful premise of theoretical, historical, and cultural discussions about the DNA of Tel Aviv. The Bauhaus, Le Corbusier, and other leading modern influences were a significant force in the design and planning of Israel at large and the White City of Tel Aviv in particular and demonstrate the popularization of architectural-historical discourse. The second aspect is the modernist Garden City plan, the urban-ecologic concept of city planner and biologist Sir Patrick Geddes, who saw the city as a habitat allowing various organisms to coexist. This applied utopia has contributed to the declaration of Tel Aviv as a UNESCO Heritage Site.

The Crystal Palace built during the first World’s Fair held in London (1851) became a symbol of modernity in Central and East Europe.

Its legendary structure conveyed the vision, desires, and dreams of the intellectuals who functioned on the periphery of modernity. International exchange at the time involved both progressives and traditionalists – Chernyshevsky and Dostoyevsky, Krzywicki and Żeromski. Bringing the idea of “glass houses” into reality was of key importance to the contemporary modernist concepts in Poland, especially after the restoration of Poland’s sovereignty.

In April 1927, Meyer started teaching at the Bauhaus, and the following year he succeeded Gropius as director of the school. Meyer changed the interests of the Bauhaus, and although there were several continuations from the tenure of Gropius, the school underwent several structural transformations. Meyer was expelled from the directorship and the Bauhaus in August 1930 on political grounds, and in reaction to this he moved to the Soviet Union with a brigade of Bauhaus students. Although Meyer and this brigade worked together only for a brief period, their migration is exemplary of a broader movement of foreign architects in the 1930s. In this presentation, using Meyer and the Bauhaus as a lens, I will address the topics of modernity, modernization and modernism—including a detailed explanation on how the several Bauhaus workshops worked in the project for the ADGB Trade Union School in Bernau near Berlin—and how these categories shifted once they started working in the Soviet Union.

In 1981 a group of architects in Warsaw issued an ‘underground’ manifesto accusing the their profession of acquiescing to illegitimate power in the People’s Republic of Poland. The ‘Warsaw Charter’ was the boldest and most damning critique of modern architecture published anywhere and at any time in the Eastern Bloc.
In this talk, David Crowley will look back from the vantage point of 1981 to explore the manifesto’s critique of C20th modernism. He will also look forward from this year, to reflect on the transformation of the cityscapes of Poland since the collapse of communist rule. In the age of hyper capitalism, the modern architecture of communist Poland appears today to be the subject of considerable nostalgia and sentiment – why should this be?