The first edition of the Academy Exercising Modernity in 2018 focused on the concept of modernity, both in a historical and a contemporary perspective. Three cultural-social phenomena of the interwar period, symbolizing universal interdisciplinary modernization programs, were in focus in 2018: in Germany, the Bauhaus, which sought to bring art and architecture closer to the concrete needs of man; in Poland, the discussion about progress and the building of foundations for a free, democratic state, as exemplifies the city of Gdynia; in Israel, the “White City” of Tel Aviv, with its architecture inspired by the principles and forms of the International Style.
The aim of the project was to confront three independent narratives about modernity – Polish, German and Israeli – and at the same time to clarify their mutual references.

These topics were addressed in different ways, each highly inventive, in the scholarship projects.

The implementation of the projects was supervised by Aleksandra Janus (curator of the Exercising Modernity program) and Małgorzata Jędrzejczyk (Pilecki-Institut Berlin, curator of the Exercising Modernity program) in consultation with the program team of the Adam Mickiewicz Institute and the Liebling Haus – The White City Center. 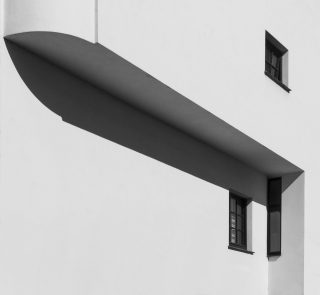 In her work, Laure Catugier explores the interrelationship between space, image and movement. Departing from architecture, the artist focuses her attention on the bonds between human beings and their environment – the built, material, physically defined one, but also the immaterial one, based on everyday human activity in space and perception.

As part of the Vis-à-vis project, Laure Catugier made a series of photographic collages and a video work consisting of images of architectural details from interwar and postwar modernist architecture photographed by the artist in Warsaw, Lublin and Poznań. Catugier uses the logic of imagination to deconstruct temporal and spatial limitations and the uniformity of the captured motifs. She connects selected images into a new whole in which the buildings of Warsaw’s Żoliborz district meet the architecture of the H. and S. Syrkus Warsaw Housing Cooperative and the O. and Z. Hansen “Przyczółek Grochowski” housing estate, while the housing blocks from the Słowacki estate in Lublin are set against sculptural forms from the local playgrounds and the buildings from the estate on L. Waryńskiego Square in Poznań. In this way, the artist establishes a relationship between topographically remote structures and creates an image of architecture as a means of interconnection.

Laure Catugier (1982, Toulouse, France) lives and works in Berlin. She graduated from the École d’Architecture de Toulouse (2005) and the École des Beaux-Arts de Toulouse (2007). Through diverse media such as photography, video or performance, she questions the perception and representation of spatiality. Her work interrogates the influence of architecture and design on the people and the social realm within local contexts. In addition to receiving residency grants in Düsseldorf (DE), Linz (AT), Takasaki (JP), Tehran (IR), Pardubice (CZ) and St Petersburg (RU), her work was also honoured by the international Celeste Prize in 2016. Over the course of 2017 she took part in the Berlin-based Goldrausch Künstlerinnenprojekt. In 2019 she received a cultural scholarship from the Pilecki Institute and the Stiftung Kunstfonds (Bonn) working grant. In the near future, she will take part in residencies at the Geumcheon Art Space in Seoul (KR), at Kiosko in Santa Cruz de la Sierra (BO) and at the Villa Champollion in Cairo (EG). Since 2013, Catugier’s work has been shown in several institutions and galleries in Europe: Japanese-German Center, Galerie Weisser Elefant, Korean Cultural Center (Berlin); Institut Français, Onomato Kunstverein (Düsseldorf); Galerie Thaddeus Ropac, Le Voltaire Mécénat Emerige (Paris); In-Sonora festival (Madrid); Artum Foundation (Warsaw); Festival Oodaaq in Rennes (France); as part of the Celeste Prize at OXO Tower (London); Festival des Artes Binnar (Porto); and Arte Fiera Bologna (Milan). In 2017, she also took part in a group show at the Centraltrack Gallery in Dallas, Texas, and very recently in the Total Museum in Seoul. 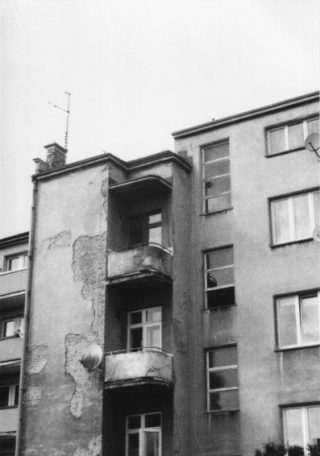 In her research project, Katri Miettinen explores the potentially shared heritage of Poland, Germany, and Israel in a modernist residential neighborhood in Bielsko-Biała, which was built in 1934 and has been undergoing change ever since. The neighborhood has often been compared to Tel Aviv because of its appearance. Culture and socio-politics played together in its development. Miettinen explores the neighborhood from different perspectives, trying to gain an understanding of a common heritage. Her research was based on archives and memories of former residents of the neighborhood.

Katri Anita Miettinen is a Finnish artist. She studied Extended Media Art and Film History at Saimaa University of Applied Sciences and Visual Cultures, Curating and Contemporary Art at Aalto University School of Arts, Design and Architecture in Helsinki. During her studies, she conducted research for the National Archives as part of a project on Finnish prisoners of war in the Soviet Union. Miettinen has participated in various exhibitions and film screenings in Finland and abroad. One of her video works was shown at the Performance Art Festival in Venice.

Postcards from the Muranów and Wilanów housing estates

In her project, Michalina Musielak examines two housing estates in Warsaw. One was built after World War II on the ruins of the Jewish ghetto in Muranów erected by the German occupiers; the other after the decline of the real socialist People’s Republic of Poland on a vacant lot in the outskirts of Wilanów. What both building projects have in common is that they emerged as innovative, comprehensive architectural concepts.

During her research, Musielak came across a postcard from 1969 showing images of the then new socialist settlement in Muranów next to pictures of the rubble landscape shortly before the end of the war. This was intended to demonstrate the progressiveness of the urban planning project and, at the same time, that of the political regime that was responsible for the project.

Musielak designs a set of postcards analogous to this one, which includes the settlement of Wilanów: where there was a wasteland before, there is now a modern settlement. The post-war architecture of Muranów is paralleled with the contemporary architecture of system change in Wilanów.

In considering and analyzing both cases, Musielak intends to address different aspects: in the case of Muranów, the question of housing shortage, socialist realism, as well as standardization and prefabrication within the framework of the national planned economy; in the case of Wilanów, the process of democratization, but also privatization in the context of globally operating companies in the capitalist economic order. Thus, not only political and economic issues are considered, but also questions of national identity.

Musielak invites various authors to discuss these questions in the form of essays. These will be uploaded alongside the set of postcards on a website specially designed for the project.

Michalina Musielak is a visual anthropologist, artist and director of documentary films. She studied documentary film the University of Warsaw and humanities at the University of Tel Aviv. She received a master’s degree in new media from the Academy of Fine Arts in Warsaw and a second master’s degree in visual and media anthropology from the Free University of Berlin. She has been involved in exhibitions at the Museum of Modern Art in Warsaw. Her film “Miss Holocaust” premiered at the Berlinale Shorts competition. Musielak currently lives in Warsaw.

The idea of the project carried out as part of the Exercising Modernity program came from Tony Judt’s plan to write a study on the history of railroad tracks and the emergence of modern life. The study is titled “Locomotion.” The historian’s untimely death did not allow him to complete the study. “Railroads,” Judt wrote, “embody many of the best and most trusted aspects of modernity.” The goal of the project is to trace the rise, fall, and rebirth of railroads as an essential part of the history of modernity. Railroads are thus related to the emergence of modern public life and the modern imagination to transcend time and space.

Waldemar Rapior studied sociology and cultural studies and received his PhD in the field of sociology from Adam Mickiewicz University in Poznań. He received scholarships from various institutions, including the Institute of Sociology at Adam Mickiewicz University, the Malta Foundation, and the National Science Center in Kraków. He conducted research on numerous projects, e.g. as the main contractor of ‘DIVO: Digital Voices & Streetwise Billboards’, a collaboration of Blast Theory (UK), Patching Zone (Netherlands) and Translocal (Finland) which was carried out in the framework of the European Union Culture Program, and on the project ‘Invisible City. Goals and consequences of non-institutional forms of spatial modification of large Polish cities and methodological problems of their research using visual data.’ Currently, he is writing a book entitled ‘Lustro współczesności. Kolej i nasze czasy’ (Contemporary mirror. The railroads and our time). 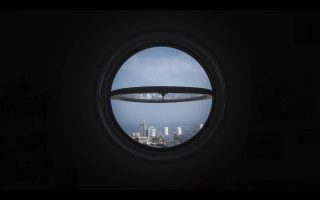 Hadas Tapouchi carried out her project in two modernist neighborhoods: the streets of Hacarmel Hadar in Haifa, Israel, and the center of the Polish city of Gdynia.

She lived in each of the two cities for a month and observed the people who lived there. She asked them what a “home” was for them. The result of her project is a film with scenes from both cities – Gdynia and Haifa. The protagonists of the film are culturally diverse communities who live together in one house and tell the story of the modernist neighborhoods. They speak about the life after the “modernist dream.” The artist works out essential similarities as well as differences between the inhabitants of the two cities. In her film she also shows that a home does not have to be a uniform physical place. The concept of a home is changeable. Just as the power of the modernist dream, the facades of the houses decay in the film. The film also reveals the biographical history of the artist’s family which was expelled from Europe after World War II.

Hadas Tapouchi was born in Beit Nehemia, Israel. She studied social sciences, humanities and photography in Tel Aviv and art at Beit Berl College School of Art. She currently lives in Berlin. For the past ten years, her projects have been combining history with art. She has been represented in exhibitions in Poland, Germany, Sweden, Israel, Hong Kong and Bulgaria.