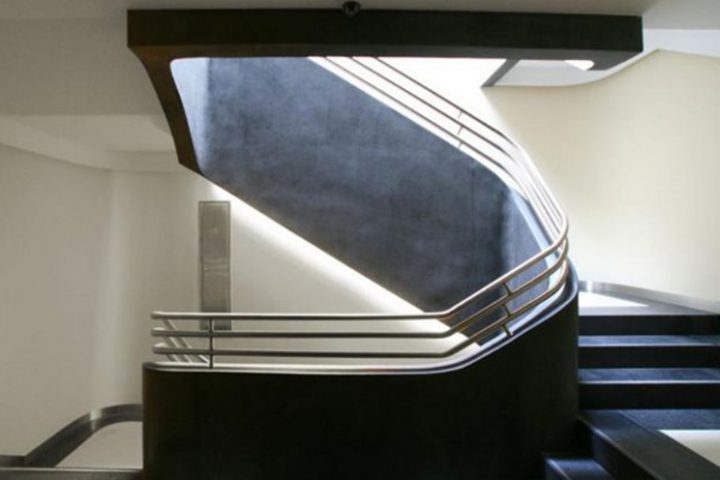 We invite you to all open lectures as part of the project Ćwiczenie nowoczesności • Exercising modernity • Modernität üben:

A Polish-German initiative of reconstruction of the demolished modernist building designed byLudwig Mies van der Rohe, located in the Polishcity of Gubin.

Villa Wolf – the first modernist building designed by Ludwig Mies van der Rohe – is to be rebuilton the Polish-German initiative in its “original form and location”. The villa in Gubin was commissioned by a local textile manufacturer Erich Wolf in 1926. The building was erected

on top of a hill by the Nysa river, and its shape brought to mind a Cubist sculpture made out of bricks. Its original structure is to be faithfullyrebuilt in the town of Gubin (now located inPoland) as the “common heritage” of the Polish and German nations. Remodeled in scale 1:1, the reconstructed villa is to be the key exhibit inthe Mies van der Rohe Museum which will focuson the European body of work of the German- American architect. In the city of Guben-Gubin, located on the Polish-German border, Villa Wolf is to be a cultural bridge over the Nysa river, which will attract architecture enthusiast from all over the world.

Modernism, especially in its architecturaldimension, means translating modern and sometimes even utopian ideas into practice.
Some of them stood the test of time, while othersdid not. Today we are asking the question: how
to conserve modernist architecture? Should we preserve it in its original form or rather adapt it to modern needs? How do other countries address this issue?

An international panel of experts will compare and discuss standards applied across the globe in order to propose a set of basic principles for conservation of modernism in Poland.

Modern architecture and its local adaptationwere the basis for the 2003 declaration of
the White City of Tel Aviv as a UNESCO World Heritage Site, generating momentum for urban conservation projects. Conservation is usually perceived as a process that focuses on the physical aspects of the modernist movement, rather than its intangible, social aspects. The decision to establish a Center focused on all aspects of architectural heritage, both tangible and intangible, provided an opportunity to host a unique residency program: The Liebling Project.The Liebling Project was a research and action group that invited multidisciplinary creative

– from architects to musicians – to study the concept of conservation and urbanism in the context of modern architecture. The project, in collaboration with the Conservation Departmentof the Tel Aviv-Yafo Municipality, operated at the White City Center during its inaugural year, developing future activities of the urban culture and education center dedicated to the earlyyears of Tel Aviv, and the modernist influencesthat shaped it. The project – supported by the executive team of the White City Center – madetemporary use of the Max Liebling House as it isbeing converted into the WCC. The reopening of the Center is scheduled for autumn 2019

Since the end of the first decade of the 20th century, the Kibbutz have evolved as a settlement pattern in which the physical planningfunctionally reflects ideologies and life-practices of collectivity and equality. In the last threedecades, the Kibbutzim have been stripped from their constitutive ideology and most of them have turned into privatized sub-urban settlements. What is the place of the communal social space in the Kibbutzim undergoing privatization processes of the collective territory? What is the possibleneed, quality and character of these communalspaces within the contemporary concrete social reality? In our lecture we shall discuss thosequestions through our work in the Kibbutzim inour attempts to reload the existing dysfunctional spaces with new potentials.